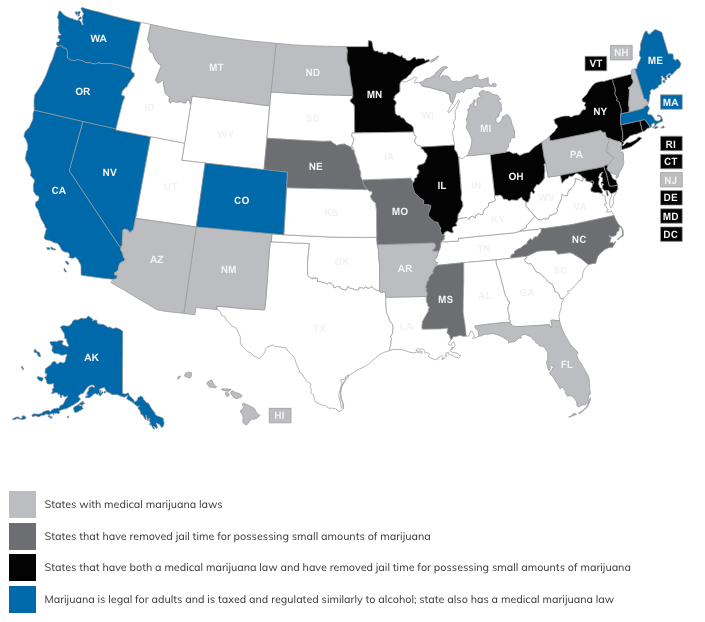 Ten states — Colorado, Washington, Oregon, Alaska, Massachusetts, Maine, Nevada, California, Michigan, and Illinois — have approved laws to regulate and tax marijuana similarly to alcohol. Washington, D.C. and Vermont have also legalized the possession and cultivation of marijuana for adults. Altogether, 28.5% of citizens in the United States live in a state that has ended marijuana prohibition.

States that have made marijuana legal have seen a tremendous reduction in the number of people arrested for marijuana offenses. In the first two years, marijuana cases plummeted by 77% in Colorado and 81% in Washington. Officials in Colorado estimate that their legal marijuana market now meets 70% of all demand. As sales in the legal market increase each year — with $1.3 billion in sales in Colorado during 2016 — the illegal market continues to shrink.

Legal marijuana has created hundreds of new businesses and tens of thousands of new jobs. From electricians to accountants to security guards, legal marijuana expands the economy. In Colorado, official statistics show that there are more than 30,000 active occupational licenses for workers in the legal marijuana sector. Both Washington and Colorado have seen a rise in tourism in recent years, and legal marijuana has even benefited their real estate markets.

In 2016, Colorado collected nearly $200 million from marijuana-related tax revenue and fees. In the same year, Washington state collected $250 million from marijuana taxes. These states are putting this new revenue to good use. In Colorado, $40 million goes each year to school construction projects. Both states also fund programs aimed at discouraging youth drug use and other important public health initiatives.

The sky is not falling as opponents predicted.

A 2016 analysis from the Cato Institute looked at the public health and safety outcomes in Colorado, Washington, Oregon, and Alaska. They found no evidence linking marijuana legalization initiatives to a rises in traffic fatalities, crime, drug use, or any other public health and safety problem. The authors concluded, "The absence of significant adverse consequences is especially striking given the sometimes dire predictions made by legalization opponents." Furthermore, multiple in-depth surveys of students in Colorado, Washington, Oregon, and Alaska show that teen marijuana use has not increased as a result of legalizing marijuana for adult use. For detailed data on teen marijuana use in these states, click here.